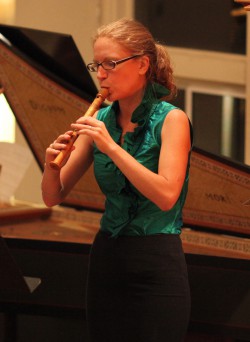 Alex Opsahl studied with Peter Holtslag and Daniel Bruggen at the Royal Academy of Music, grOpsahladuating in 2004 with First Class Honors. She went on to study privately in Italy with Bruce Dickey, continuing these studies at the Schola Cantorum Basiliensis. She was the winner of the 2003 Moeck Solo Recorder competition, the 2001 and 2003 RAM Early Music Prize and 2003 Hilda Anderson Dean Award. She works now both as a cornettist and recorder player across Europe and the US. Alex has performed with the Amsterdam Baroque Orchestra under Ton Koopman, the Orchestra of the Age of Enlightenment, Apollo’s Fire, the Green Mountain Project, Le Studio Musique Anciennes de Montréal, Cappella Artemisia, Musica Angelica, The Whole Noyse and American Bach Soloists. She has performed at the Berlin Philharmonie, Wigmore Hall, Purcell Room and the Royal Albert Hall, and played in filmed productions of L’Incoronazione di Poppea with both Oslo Opera and Glyndebourne Opera. She recorded the Vivaldi’s Concerto in C Minor, RV 441 with the Norwegian period orchestra Barokkanerne under the label 2L. Alex is a member of the Dark Horse Consort, and is the Music Director of LA-based ensemble Tesserae.