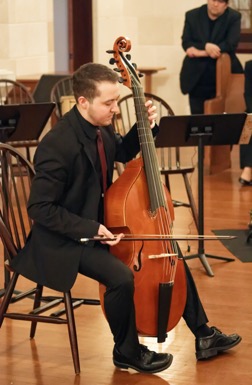 A native of Los Angeles, Malachai Komanoff Bandy has amassed a professional performance record on some twenty instruments spanning over 800 years of music history. He graduated cum laude with Distinction in Research and Creative Work from Rice University’s Shepherd School of Music with double bass and music history degrees. In recent years, Malachai has performed as a violist da gamba and violonist with various ensembles in the U.S. and Europe, including The Orpheon Consort, Ars Lyrica Houston, and Ciaramella. He is also a featured soloist in Bear McCreary’s scores to the films 10 Cloverfield Lane (yaylı tanbur, 2016), Welcome Home (viol, 2018), and Emmy-winning title theme for the STARZ television series DaVinci’s Demons (viol, 2013), and the videogame God of War (nyckelharpa, 2018). After completing a Wagoner Fellowship-funded individual course of viola da gamba and organological study with José Vázquez in Austria, Spain, and Switzerland, Malachai began graduate studies in Historical Musicology as a Provost Fellow at the USC Thornton School of Music in 2015. He is currently in the final stages of creating the first comprehensive aural catalog of the Orpheon Foundation’s fifty historical violas da gamba (Duino, Italy) with the support of a Presser Graduate Award (2016). His present scholarly interests include topics pertaining to number symbolism in the North-German baroque, as well as viola da gamba technique, repertoire, instrument design, and iconography.